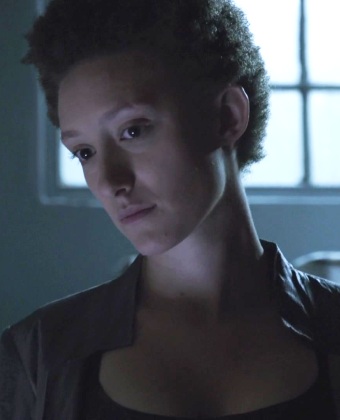 Meredith Walker is a long-term patient at Eichen House mental hospital and a banshee. In Season 3, Meredith communicates with Lydia Martin when the latter is kidnapped by "Void Stiles". Meredith tells Scott's Pack where to find Lydia. In Season 4, Lydia goes to Meredith for help in decoding the hitlist of Beacon Hills' supernatural population, the Deadpool. Meredith is on the Deadpool itself and is found dead, apparently having committed suicide. Later however in truth, Meredith had faked her death and is the one who put the Deadpool online. She had been following Peter Hale's 'plan' to purge the supernatural of Beacon Hills along with her belief that the supernatural are monsters. After Lydia shares her mindset with Meredith that not all mosters do monstrous things, Meredith shows guilt and horror for the carnage she's caused. In Season 5, Meredith communicates with a catatonic Lydia at Eichen House. She teaches Lydia how to use her banshee voice as a weapon, to make her Scream a bullet and assists Scott's Pack in helping Lydia escape Dr Valack.

Meredith Walker is someone who's head and speech is almost always up in the clouds due to her banshee status and her dark, traumatic past. She is an enigmatic, being shy, eccentric, often speaks incoherently and is fragile both emotionally and mentally to the point of self-endangerment.

Despite her oddness, Meredith does display humanizing qualities and a sense of resolve and conviction. She'd masterminded the Deadpool plan, by blackmailing Brunski to do all the legwork and manipulating Kate Argent into providing the means, the money for executing the plan. Meredith displays the persona of a pessimist as she professes that the supernatural are monsters who inevitably bring death, hardship wherever they go.

However, upon meeting fellow banshee Lydia Martin and her more optimistic, humanitarian worldview, she shows a sense of empathy for the injuries she caused one day upon finding her banshee voice and upon Lydia's Hearing her best friend Allison's death Meredith sought to bring a means to end the suffering. Meredith also comes out of her eccentricity enough to realize the consequences of releasing the Deadpool, and the mental competency to show remorse, guilt for her actions. Most likely she displays compassion and repentance by showing Lydia how to use her voice offensively and encourages her to save the lives of her friends.

One day, Meredith was at school, in chemistry lab. She kept hearing screams and had to keep covering her ears. When the teacher came to ask her what was wrong, Meredith snapped and slammed her hands down on the table, causing her Scream to revertebrate all throughout the classroom "like a bomb." Many of her fellow classmates had glass embedded in their skin. The incident was blamed on a chemical explosion, but people knew it was Meredith.

Meredith is talking on the pay phone Stiles's first morning in Eichen House. She says that she wants to tell them the full story and that one of them is behind her. Stiles thinks she's talking about him.

Meredith is moved to the closed unit after Stiles leaves because she wouldn't stop screaming.

Lydia and Stiles go to Meredith for help with deciphering the second deadpool key. Meredith claims she can't help, but ends up giving Lydia a phone number that partially spells out Aiden's name. She almost has a breakdown, though, and Parrish takes her back to Eichen House. Lydia and Stiles go to her again for the third cipher key, but she complains that she can't help them. They press her, but she says she can't. She starts to freak out, and Parrish puts a stop to the questioning before they get any answers.

Later, Meredith is shown on the floor of her room with a bedsheet tied around her neck, apparently dead of suicide.

At the end of 4x09 - Perishable, Brunski tells Lydia, Stiles, and Parrish as he's dying that he isn't the Benefactor and he wasn't controlling Meredith like they thought. Instead, Meredith was controlling him. Meredith then walks out into the basement and reveals herself as more calm and composed than any time previous. She says that Brunski wasn't on her list but he was a bad man. While it is heavily implied that she's the Benefactor, it is later revealed that she only overheard Peter's insane rantings while he was hospitalized after the fire. He fantasized about killing all the supernaturals in town and starting over and using the Hale fortune to do it. Meredith simply helped carry out his wishes.