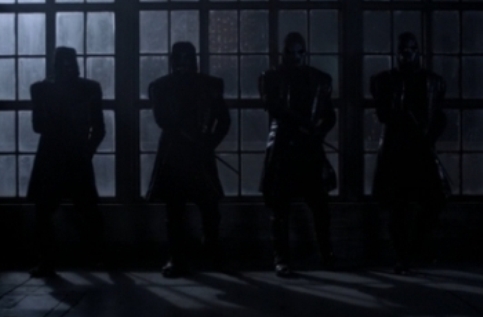 In Teen Wolf mythology, the Oni are demons of Japanese origin.

They are featured in Season 3. Oni are summoned by the kitsune Noshiko Yukimura.

Oni are humanoid-shaped supernatural instruments. They have to be summoned by an individual who automatically becomes their master. Oni perform their tasks without any personal animus, and are not motivated by any concepts of right or wrong. Their motive is that of their master's, and are described as a force of nature.

Oni appear dressed similar to samurai, wearing black modified Shinobi Shozuko and black masks similar to Hannya. Their inner body is composed only of dark energy. Their eyes glow a greenish-yellow when they utilize their self-scanning process on a suspect.

The Oni wield the Japanese sword, the Ninjato. 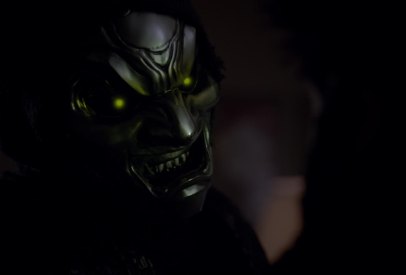 At the end of More Bad than Good, an unseen being uproots a green plant from the Beacon Hills Nemeton. Numerous supernatural fireflies emerge from the cracks in the magical tree. The insects then assimilate together, forming human shaped figures. The Oni are conjured.The demons appear at the Argents' apartment in Galvanize and attack Isaac Lahey leaving him in a state of hypothermia.

In the following episode Illuminated, Isaac describes his attackers to Allison and Chris Argent. Chris is revealed to have a broken mask of the same variety they wear. The Oni appear outside the building where Derek's loft is structured. They appear before Derek, the eyes of one of them glowing a greenish-yellow. They show up at Derek's loft where Danny Mahealani is hosting a black light party. It is revealed they had tagged Isaac on the left side of his head with an unusual marking (己) when he was attacked the night before. They attack and tag all the supernaturals in the gang, the werewolves and Lydia. Afterward, they fight and overpower Derek and Scott. The sun suddenly rises and they dematerialize.

In Silverfinger, Chris Argent relays a story when he was 18. Three Oni had appeared during Chris' first gun deal with Yakuza and went after the Yakuza boss. The Yakuza entourage opened fire on them to no use, they slaughtered all the men in their way and slayed the boss which was a supernatural. Chris had shot off the mask of one of them saving the life of a Yakuza mobster nicknamed Silverfinger. Chris, Allison and Isaac learn from Silverfinger that the Oni seek to hunt down and kill the dark type of the Kitsune known as 'Void' or a Nogitsune. The mark they leave on people they have tagged is the Japanese kanji for "self", indicating that tagged person is not possessed by a Nogitsune and is still themselves. The Oni inspect Scott and Kira and determine they are not possessed. At Beacon Hills Memorial, the Oni come upon the Nogitsune, which is possessing Stiles Stilinski. When the Oni try to test Stiles, The Nogitsune's power is able to overpower the Oni, by pulling the fireflies that they are made out of from their chests and killing them.

In Riddled, it is revealed that the Kitsune Noshiko Yukimura was the one who summoned the Oni to kill the Nogitsune. Noshiko has the ability to lead the Oni as seen when she calls the two remaining Oni to her side when facing off against the Nogitsune. Noshiko can summon the Oni by sacrificing her Kitsune Tails, physically manifested as blades or kaiken. The older the Tail that's sacrificed, the more powerful the respective Oni is.

In Insatiable, after the Nogitsune is exorcised from Stiles' body, Noshiko leads the Oni to Camp Oak Creek to finally destroy the Dark kitsune. The Oni move in to slay the Nogitsune, but the dark Trickster breaks the last of Noshiko's Tails and takes control of the Oni. The Nogitsune turns the Oni against Allison, Isaac, and Kira and Noshiko Yukimura. Isaac is badly injured and almost killed in the fight but, as an Oni is about to deliver the final blow, Allison shoots an arrow into its chest, causing it to release a yellow light before violently dissolving into smoke killing the demon. Another Oni kills Allison by stabbing her through the abdomen.

In The Divine Move, the Nogitsune has the Oni attack the hospital, the Sheriff's station and the Animal clinic. After cutting down numerous innocents in their way, the demons wound Mellisa McCall, Alan Deaton, Sheriff Stilinski and Deputy Parrish with their blades. Smoke begins to ooze from their wounds, slowly killing them, as part of the Nogitsune's sadistic game. The Oni fight Scott and Kira in the illusion created by the Nogitsune, and in the physical world, Derek, Ethan and Aiden. Chris and Isaac figure out how Allison killed one of the Oni; she'd fired a silver arrowhead just as her father had shot off the mask of an Oni in the past using a silver bullet, that silver is a poison to the Oni. They arrive at the school to assist Derek and the twins. They destroy the remaining Oni with Allison's silver arrowheads, unfortunately Aiden is fatally impaled by an Oni's blade but with the werewolf killing the final Oni.

The Oni possess the most versatile abilities seen in the series. They can materialize out of shadow, form their Ninjatōs in the same manner, they could phase through solid matter, they could translocate and they fight with super-strength and super-reflexes, in a martial arts combat style. When attacking Lydia, they supposedly muffle her banshee voice. Their Ninjatōs could release a supernatural poison to kill victims they'd wounded.

The Oni can't operate during the day as the morning sun caused them to dematerialize. Oni can be warded off by mountain ash as with other supernatural beings and they are ultimately vulnerable to silver as a silver bullet shot off an Oni's mask, slowing it down and a silver arrowhead that stayed in the body destroyed the demon.